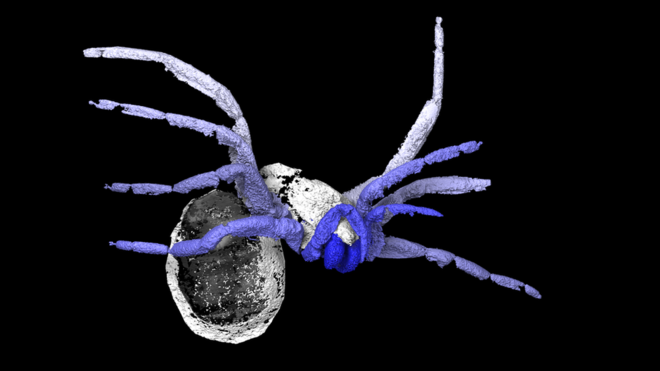 Proceedings of the Royal Society of London B: Biological Sciences

Spiders are an important animal group, with a long history. Details of their origins remain limited, with little knowledge of their stem group, and no insights into the sequence of character acquisition during spider evolution. We describe a new fossil arachnid, Idmonarachne brasieri gen. et sp. nov. from the Late Carboniferous (Stephanian, ca 305–299 Ma) of Montceau-les-Mines, France. It is three-dimensionally preserved within a siderite concretion, allowing both laboratory- and synchrotron-based phase-contrast computed tomography reconstruction. The latter is a first for siderite-hosted fossils and has allowed us to investigate fine anatomical details. Although distinctly spider-like in habitus, this remarkable fossil lacks a key diagnostic character of Araneae: spinnerets on the underside of the opisthosoma. It also lacks a flagelliform telson found in the recently recognized, spider-related, Devonian–Permian Uraraneida. Cladistic analysis resolves our new fossil as sister group to the spiders: the spider stem-group comprises the uraraneids and I. brasieri. While we are unable to demonstrate the presence of spigots in this fossil, the recovered phylogeny suggests the earliest character to evolve on the spider stem-group is the secretion of silk. This would have been followed by the loss of a flagelliform telson, and then the ability to spin silk using spinnerets. This last innovation defines the true spiders, significantly post-dates the origins of silk, and may be a key to the group’s success. The Montceau-les-Mines locality has previously yielded a mesothele spider (with spinnerets). Evidently, Late Palaeozoic spiders lived alongside Palaeozoic arachnid grades which approached the spider condition, but did not express the full suite of crown-group autapomorphies.