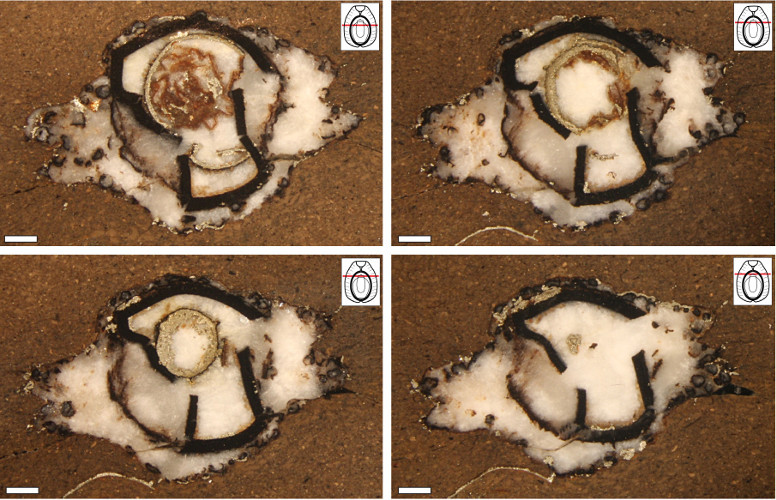 Review of Palaeobotany and Palynology

A new species of Medullosan ovule from the Mazon Creek Carboniferous lagerstätte is documented using a novel combination of non-invasive X-Ray Micro-Tomography (XMT) and orientated precision sectioning based on the XMT results.  3-D reconstruction of the ovule has correlated geometries of different layers with tissue characteristics gathered from wafered sections, with the methodological combination presenting a virtual reconstruction of the specimen and also enabling positioning of serial sections of the holotype in pre-determined positions.  Stephanospermum braidwoodensis sp. nov. has four longitudinally orientated sarcotestal wings, two to each side of the major plane that demonstrate 180° rotational (bilateral) symmetry, while the sclerotesta has three prominent longitudinal commissural ribs and the pollen chamber has three small ribs and triangular nucellar beak, both demonstrating radial (threefold) symmetry.  This demonstration of both radial and bilateral symmetries in different tissues emphasises the complexities of inferring systematic affinities of fossil seeds from symmetry alone.  We consider S. braidwoodensis to be closely related to the co-occurring S. konopeonus Drinnan et al., and postulate that it was born on a fertile truss similar to that of the latter species. Finally implications of our findings for the utility of these methods in identifying additional species from the Mazon Creek biota are discussed, and the advantages and disadvantages of different methods of nodule preparation are considered. We conclude that additional species are likely to be recognised from the Mazon Creek flora by application of the same methodologies used in this investigation.